For more than two decades, homeless and unemployed individuals have bought and sold magazines to make a living on the streets. In February the world’s newest ‘street paper’ launched in recession-struck Greece.

Just five years ago, homelessness was no common sight in Athens. When people lost their jobs or fell upon hard times, they relied on their families. Since the crisis, many parents can no longer afford this. The Greek economy has shrunk for the past five years and is expected to contract by another 4.5 per cent in 2013. Unemployment is the highest in Europe, with over a quarter of adults and 64 per cent of youth now jobless.

Despite bail-outs of billions, recovery is nowhere near. Two months ago, Greece became the first developed nation to be degraded to emerging-market status. On the same day, the government pulled the plug on its broadcasting operations, proclaiming it could no longer afford to fund it.

The story of Shedia in fellow street paper The Big Issue Japan, sold by homeless vendors in Tokyo and other cities.

Journalist Chris Alefantis launched Greek’s first street paper Shedia (meaning ‘Raft’) in Athens in February. Based on the concept popularised by The Big Issue magazine in the UK, the model enables vendors to buy their copies for half the cover price and sell them on, keeping the proceeds. With an initial investment of one copy, they become micro-entrepreneurs. Beyond an income, many street papers offer their vendors mental support, housing and training.

Statistics from the International Network of Street Papers show that sellers make a combined profit of more than $40 million a year globally. Annually, 28,000 vendors sell their local street paper in more than 600 cities on five continents.

Circulation has dropped in some regions, including the UK. The latest figures from the British Audited Bureau of Circulations (ABC) show an 18.1 per cent decrease in sales over the last year alone. The different regional editions of the magazine have a combined circulation of 86,598. By contrast: in 1997, The Big Issue was the best-selling current affairs weekly magazine in the UK, with a national ABC figure of 294,000. Its founder, John Bird, has blamed the fact that the magazine is no longer the ‘new kid on the block’ and the consequent lack of media coverage for the decline.

Many street papers also are affected by the changing patterns in media consumption. To address the shift from print to digital, the International Network of Street Papers launched INSP Digital last year. It trials various digital products, each of which still needs to be bought from a vendor to retain the vendor-buyer interaction that makes the street paper model unique.

Other regions, however, are still on the up: The Big Issue Australia sells 33,000 copies a fortnight; an almost five-fold increase from its start in 1996. Recognizing the risk of decline in print sales, the paper launched a digital edition in June. “By offering a digital version, we hope to meet the needs of customers and reach out to new audiences to help increase sales for vendors”, the magazine’s CEO Steven Persson said at its launch. 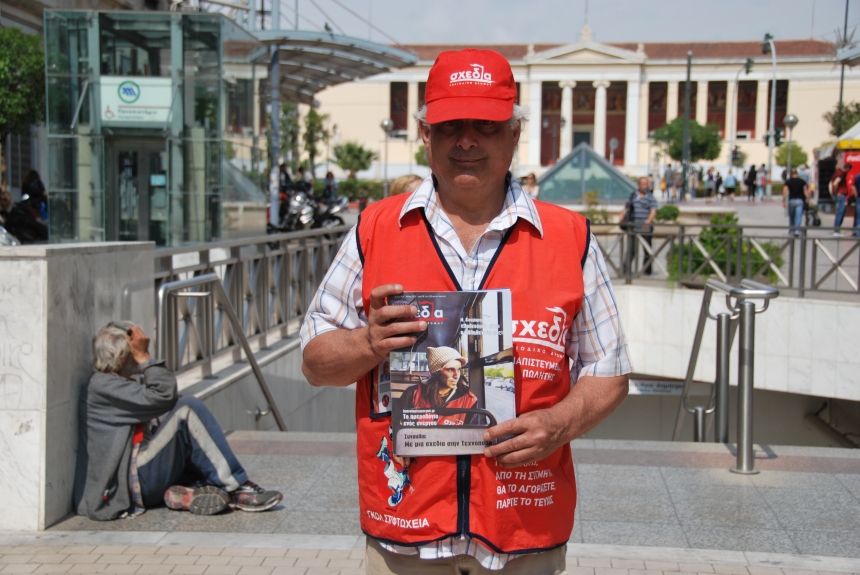 Shedia vendor Nikos selling the magazine at an Athens metro station, May 2013.

In Greece, the initial sales figures show that there is a market for a street paper, despite the economic downturn. Shedia’s print run projections of 5,000 per month proved too conservative. Circulation is up to 15,000 now and both the second and third edition had to be reprinted due to early sell-outs. Calls for distribution points have come in from across the country. “There is no sign of it slowing down,” says Alefantis.

Like many new social enterprises, scaling up fast is proving a challenge for Shedia. Staff struggle to absorb the constant stream of new recruits turning up at the small make-shift office. Vendor coordinator Sergios Milis has run out of pitches and vendor jackets. The first hundred sales spots were filled within weeks of launching, he says.

Vendors started to spread the word when they realized how much money they were making. Explains Milis: “Some sell fifteen or twenty copies a day [at €1.50 profit] and actually earn more than people in regular jobs.”

Of the 1.3 million unemployed Greeks, more than one million are now cut off from even the lean state benefits. A ‘brain-drain’ has seen 120,000 professionals leave the country since 2010. For those left behind, drugs have increasingly become an escape route. Illegal street trade is thriving and its disastrous effects are visible around the city centre, where users shoot up in broad daylight and needles and glass pipes lie scattered around parks and alleys.

Shedia vendor and former addict Giannis (38) says he was ‘lucky’ he started treatment in 2007, before government spending cuts kicked in. “When I see the guys starting drugs now, I worry that that they won’t get the support that saved my life.”

Tackling social issues through a business model rather than traditional aid is relatively new to Greece. One leading philanthropic organisation believes that social enterprise could play a crucial role in the country’s recovery. The Stavros Niarchos Foundation has provided charity grants worth $1.39 billion since 1996, with half the money spent in Greece.

“Shedia provides a solution, rather than a relief-oriented approach,” says Head Program Officer Myrto Xanthopoulou. The street paper’s unconventional model caught the grant makers’ attention and the foundation is now looking to support initiatives with a similar set-up.

Vendors say the range of buyers is broad – from teenagers to pensioners and visiting islanders who heard about the magazine on radio and TV. The sales force’s own demographic too is diverse: from former drivers to nurses and tradesmen. What they have in common is that the vast majority had never been unemployed before the crisis.

Vendor Nikos heard about the street paper from another vendor. He is builder by trade but lost his job three years ago. “Selling the magazine means I finally make some money to live on,” he says.

And then there is Lambros, a Greek-born who moved to South America for work, came back in Greece’s boom days but lost his job and home when the recession struck. He ended up on the streets with no hope of a way out, until Shedia was launched. He was among the first to sign up.

“People might think that 1.50 euro is not a lot, but to me it makes a huge difference,” Lambros says. For the past two years, he did not have a penny in his pocket. What he craved the most was buying a cup of coffee. More than the beverage itself, it offers a moment to escape from stress, or a nice conversation, he explains. “When you lose that, it is a huge loss.”

Lambros spent his first street paper sales earnings on a treat for his friend Giannis, whom he met at a homeless shelter before the pair signed up as vendors. He bought two coffees. “It is the small things that make me feel human again.”