On the 9th of July, South Sudan will split from the north and become the world’s newest nation. After decades of bloody civil war which left 2 million people dead, southerners prepare for life in an independent country. A country that some won’t ever be able to see.

The road to the Kometi family’s hut is a rutted dirt track that cuts through tall grass and overgrown weed on either side. During the rainy season, especially, it can be a struggle to reach the compound which is located about six miles off the main road. There are urban legends of aid workers who were stranded in mud in their cars overnight whilst hyenas circled close-by in the bush. Yet all this does not stop Andrew Maina from coming here at least twice a week. He has good reason, he says, and would make the journey despite the danger and even if he had to do so on foot. 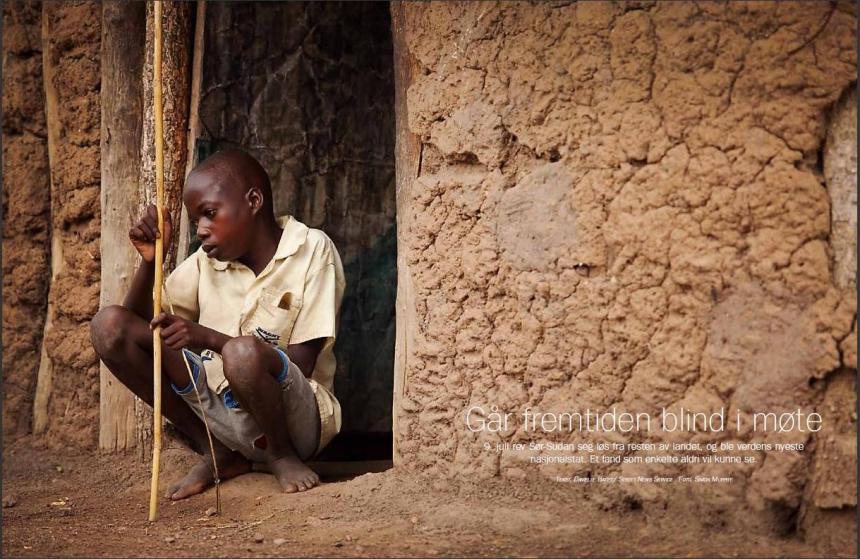 The reason becomes clear at the deserted compound. Maina walks up to one of only two mud huts and kneels in front of the entry. His voice is soft as he speaks. “Razigi, are you there?” A few seconds later a timid looking 13-year old boy appears in the clay doorframe. He wears a bleak, yellow shirt that is torn on one side and grey shorts with gaping holes in them. As he slowly steps outside in his bare feet, he runs a palm along the straw roof of the hut while his other hand grasps a bamboo stick. The boy’s eyes look glazed and lifeless and Maina explains that Razigi Kometi is blind.

Maina takes him by the hand and leads him to a covered cooking area in the corner of the compound. They sit down on wooden stools and Maina places a pen on a table made of bamboo sticks. He asks Razigi to find the object and the boy places a hand on the table and scans the surface until his skin touches the pen. He picks it up and feels it with both hands and for the first time, Razigi speaks: “pen”.

It is simple exercises like this, Maina says later, that are of great importance for Razigi’s future. “He needs to learn basic skills to protect himself against injuries. We are teaching him methods like using the back of his hand to scan surfaces before he grabs something, so that he does not cut his fingers. Safety is our priority, but our biggest task is to try and give him his confidence back.”

War has affected most of Razigi’s young life. He grew up in a small village called Lui in one of the poorest areas of war-torn southern Sudan. His early childhood was marked by conflict between the predominantly Muslim north and the Catholic and tribal religions dominated south, when government soldiers and rebels from the Sudan People’s Liberation Army (SPLA) fought in what became Africa’s longest civil war. A peace agreement was signed in 2005, when Razigi was 7 years old and his mother Mary hoped the end of the war would mean a new beginning for her and her eight children.

Razigi on the cover of CAIS magazine, Portugal, August 2011.

However, as with thousands of other people, disaster struck again when Razigi and his mother were bitten by a blackfly and developed a disease called Onchocerciasis, or river blindness. Over 37 million people are infected and 99 per cent of cases are found in poor African communities. The disease causes debilitating skin disorder and eye damage, and in the worst scenario leaves people blind. If detected and treated in time, blindness can be avoided. But the medical centre in the area was highly under resourced and no medication was available. By the time Maina’s colleagues from the Southern Sudanese disability charity SEM came in contact with the Kometi’s, both Razigi’s and Mary’s eyes were damaged beyond repair.

These are the hidden legacies of the civil war, says Maina. “When people think about war victims, they often envision shot wounds or landmine injuries. They don’t think about all those people whose illness or death could have been prevented, if only the right treatment would have been available. The war has stopped almost all development here. Many of our clients’ disabilities are directly related to the complete lack of medical resources during and after the war.”

An estimated 3.2 per cent of the population of southern Sudan is blind, an exceptionally high rate even for Africa. Many cases are caused by parasitic infections, which often can be prevented. In the case of Razigi and many other families in the states of Western and Central Equatoria, avoiding contact with the blackfly was almost impossible. Maina explains: “During the war, they had to stay close to the water to survive. They ate the fish, drank the water. But it was the same river that made them blind.”

“During the war, they had to stay close to the water to survive. They ate the fish, drank the water. But it was the same river that made them blind”

Growing up in war and extreme poverty, Razigi never had a carefree life, but losing his sight distressed him to what his aid workers call a ‘worrying’ level. When SEM staff started working with him, he often refused to come out of his hut. Attempts to teach him how to use a walking stick led him to angrily throw it away. Things became even more difficult when all of Razigi’s younger siblings had started school. All of a sudden he was alone in the compound, with no one to play with and nothing to do. When asked whether he would like to go to school with the other children, Razigi’s big, dark eyes fill up with tears. They stream down his face as he nods his head. He whispers a few words into Maina’s chest. “He is crying because he wants to be just like them.”

With support from Catholic aid agency Caritas Scotland, SEM reaches out to 6,500 people in rural areas across three counties. One factor that complicates the situation in Sudan is the war trauma present in many people, says Maina who is an occupational therapist. In Western Equatoria State his young patients often suffer from anxiety, fear of loud noises, unexpected movements and high levels of stress. It has made Maina all the more determined to do his job.

In the Kometi’s compound, efforts of the SEM team’s long, patient hours of training are slowly starting to show. Upon Maina’s inquiry about what Razigi has been up to since his last visit, the boy replies shyly: “I washed my own clothes last night.” “That is very, very good of you”, replies a broad-smiling Maina. And to his colleague, when Razigi has gone inside the hut: “This is a milestone.”

Orientation and mobility training are of great importance to a blind person’s development and support from family and relatives is crucial. Maina and his colleagues want to work more closely with Razigi’s mother, teaching her skills to support herself and her son but a lack of resources means that their attention for now is focused on the child. An aunt who lives with the family helps out when the therapists are not around.

With independence finally within reach, many South Sudanese are hopeful for the future of their new nation. Despite on-going disputes over land and oil in the border areas, South Sudan’s president Salva Kiir is determined to avoid any actions that might jeopardise long-longed independence. His party, SPLM (SPLA’s political arm), has promised democratic governance and development, but the challenges are massive. A report released by the World Bank in 2010 stated that 85 per cent of citizens of Southern Sudan live below the poverty line, compared to 46 per cent in the north. Life expectancy nationwide is 58.5 years, but the unfair distribution of wealth and the consistent lack of development in the south mean that the real figure for the new nation is even bleaker.

In a country that has to start from scratch on all levels, adequate government support will be a long way off. Charities and churches in the meantime make small steps to improve the life of some of the nation’s most vulnerable. With a bit of luck, the village school in Lui might be able to teach Razigi basic Braille next year. One teacher has already expressed an interest, and SEM is looking into possibilities of funding the training. They also hope to purchase some special toys and tools, like a ball with a bell inside it. Football used to be Razigi’s favourite sport.

Behind the two mud huts that make up the Kometi’s living quarter is a narrow, earthy path. It is only a few hundred yards long, but when Razigi became blind, it became endless to him. At the end of the path lives one of his two only friends. He used to know the road like the back of his hand, but without the ability to see, he is frightened to leave the compound. At the end of every visit, Maina and Razigi enter the track together. Razigi goes ahead, touching the grass left and right with his stick so he knows he stays on track. He counts the steps until he reaches the number where he ended last time. That is when Maina puts a hand on his shoulder, gently encouraging him to walk a few more steps before turning back. They hope to reach the end of the path in a few months’ time.